Our first day at the Masai Mara

We took off after a wonderful breakfast at the Lion Hill  lodge. The objective was to get to our lodge in Masai Mara National Park and the Sopa Lodge by 1:30 for lunch and the afternoon game drive.

By the way, if you ever go on safari in Kenya or Tanzania, I can recommend the Sopa chain without hesitation, and no, they are not paying me to say this. 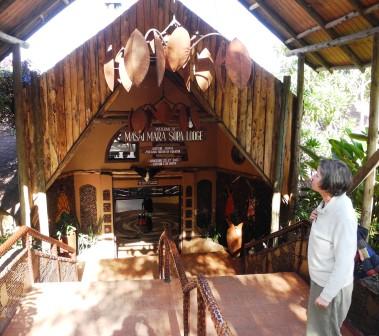 At 1:30 all I wanted was out of the vehicle. We had just spent an hour on the worst road I have been on in years. Gideon, who was working hard at the impossible task of missing potholes asked me if I could drive this road. I told him I had driven worse and described a road equally as beat up but in the mountains of Mexico where you had no room on either side to swerve because of the mountain on one side and a 2000 foot cliff on the other.  When I was done describing that experience I told him how glad I was he was driving instead of me by saying  “I’m to old for that shit anymore”. The road is the only road to Kenya’s most visited park. The government has fixed a lot of roads in the last couple of years, but for some reason, not this one.

All is well that ends well. We got to the lodge and checked into yet another very nice room. Before we could really rest, it was time for the afternoon game drive. We soon forgot about the drive to the park, in favor of the wonderful drive in the park.

This is the only single park in Kenya where if you are lucky and diligent, and have a good guide, you can see all the “big five”.  We got lucky, and we have a great guide.

Big game guides are no different, really, from fishing guides. Except they speak Swahili and Masai. When they pass each other on the road they share information just like the fishing guides. Except instead of asking ”Where are the lunkers”, they are asking “Where are the lions”. At least that is what I think they are asking. They might be swapping stories about the idiots they have in their vehicle that just will not be happy until they see lions mating.   I am one of those people. I told Gideon I would not be happy unless I saw something kill something, and animals mating. We both laughed at that, but an hour later, while we were observing a troop of baboons, he said, ”Look, baboons mating.” Sure enough. This being a full service blog, here is the photo.

Baboon style. Do I not try to include you in everything on my trips?

I never thought that at any point in my life would I say, “Big deal, another herd of elephants” or snidely comment “Oh boy, more gazelles.”  Nor did I think I would ever know the difference on sight between a lesser gazelle, a greater gazelle and an impala. I do now. 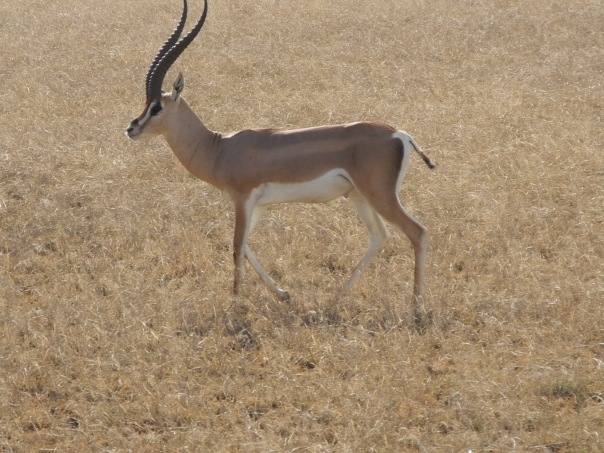 They are beautiful and they abound in the national parks in Kenya. I drove one of these when I was teenager, it was made by Chevrolet and not this pretty.

I have always wondered why no one ever domesticated the zebra. Gideon told me that the zebra has a weak back. I thought about that and said “too bad, it would be a beautiful sight to see a Masai warrior riding a zebra.”  I honestly think he likes my weird sense of humor, because he sure laughs at me. It is a wonderful thing to see herds of zebra grazing amongst gazelles and wildebeest out in the wild.

Ride'em Masai. Can you imagine a tall guy all dressed in red galloping across the Mara on this? Actually this is a tough shot to get. Zebras are shy and as soon as a camera appears they turn their ass to you. I have dozens of pictures of Zebra's behinds, just ask.

Masai Mara, being the most popular park in Kenya, even before high season, has quite a few visitors. This equates to quite a few vehicles out in search of game. They all have short wave radios in case they have a break down. But what they really use them for is sightings of the rarer animals. Today, as we were casually driving around, all of a sudden the normal chatter over the short wave rose to a euphoric level. Even though they were all speaking in Masai, I knew something big was up. Gideon did a four point turn and found a seldom used trail through the savannah and started hustling. “They spotted a leopard. We must go see the leopard.” Mind you, the leopard is one of the big five, and any guide worth his Shillings is going to make sure you see one.  We started flying across the open fields until we came to an established trail and headed to the leopard sighting. We turned a corner around some trees and BAM we were in the middle of a huge heard of buffalo. One thing buffalo are not is in a hurry. Another thing they are not is intimidated by a safari vehicle. They probably outweigh one and could redefine the term fender bender with those horns of theirs. Gideon was motivated. We had to see the leopard. He inched his way thru the herd and we were back on our fast paced quest.

Weaving our way through the herd.

Now the human herd started to appear. Vehicles were converging on the site where the leopard was from every point on the compass. They came on trails, across the fields and through ravines. No obstacle was going to stop any guide from treating his guests to one of the big five. Mary Ann and I started laughing. We could point in any direction and there was another Land Rover hell bent for leopard.

It was worth it. It was an incredible cat just meandering its way thru the bushes and fields. It had no concern for the human element. All the animals seem to know they are protected. Or maybe they know they cannot attack a vehicle. At this point in the history of human/big game relations there is a comfortable peace.

A leopard approaching you in this cat like manner makes you glad you are in a vehicle. 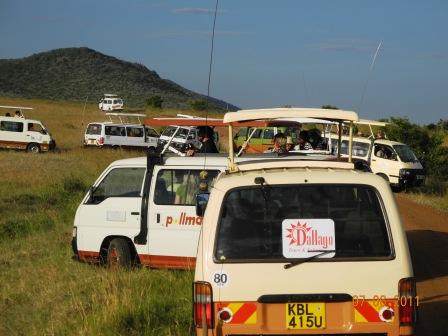 We were not the only ones there! It was amazing how the vehicles all arrived from every direction.

After we navigated our way out of the traffic jam, we noticed another group of vehicles. Could we be lucky again? YES! Gideon again made a bee line to the new sighting and we found our 4th of the big five. Not one but TWO cheetahs. They were laying in the shade watching the humans watch them. They had very obviously just consumed a rather large lunch. They looked too fat to even walk. These are the world’s fasted animals, but apparently not after a feast.

They were just trying to digest their lunch in peace... 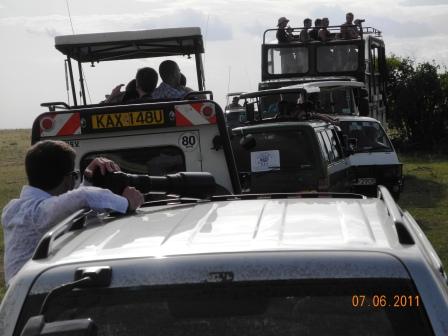 ...but the humans had other ideas.

I asked Gideon “if this were high season, how many vehicles would have come to see the leopards and the cheetahs?” He wistfully responded “at least a hundred.” It goes without saying, come to the Masai Mara before high season.

Again asante san for reading. Please hit share so your FB legions can enjoy it, and oh please make a comment.