Lake Naivasha, Crescent Island, Thousands of Birds and a Bloat

The day started with the return drive out of Masai Mara Park.  The only thing that made it tolerable was thinking back to what a marvelous piece of earth we had just visited. I want to return to Kenya, but I will not return to the Mara until they fix the road. If you are reading this blog with an eye towards your first trip to Kenya, definitely go to the Mara, but bring a pillow to sit on in your vehicle.

On the way out we went past a Land Rover sporting a logo for the Michigan State University Hyena Study Project. I did not get a photo, but you can Google it to find out that this project has been going on for something like twenty years . Many of the students ,mostly grad students working on a PhD in Hyena (I’m sorry, the job market there must be pretty thin) post stories to http://msuhyenas.blogspot.com. They are a good read. If they cannot find a job being head honcho Hyena researcher, they should try writing.

This is Gideon’s home territory. He showed us a set of four contingent lots he is buying in the first big town outside of the park. He bought the lots because they are building a Catholic University right next to where his lots are. He wants to build 4 houses to rent out to faculty. He is an industrious guy. He is the youngest of four sons to a decently wealthy Masai man. In Masai tradition, the youngest gets the biggest cut of the inheritance, but his father told him he would not get a single goat if he did not do well in school and go out and make his own living.

Gideon showing us his 4 lots, a future real estate magnate!

Once we got off the terrible road it was swift and comfortable trip to our next and final destination. Lake Naivasha. This is a popular expat enclave, few hours out of Nairobi. The lake is beautiful. Birds abound. It sits at 6,222 feet above sea level and less than ½ a degree south of the equator. Put all that together and it makes for a wonderful climate. 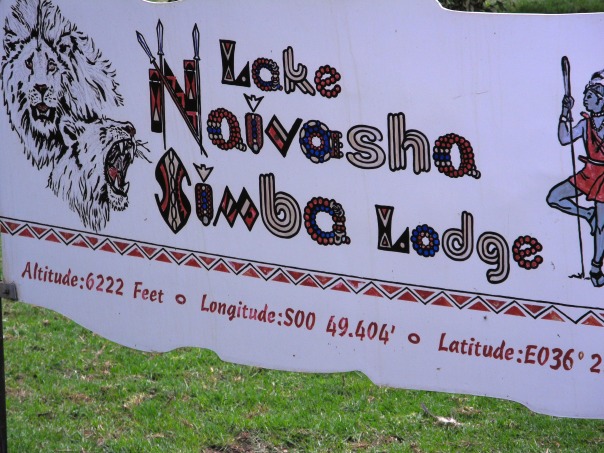 They should change the name of this place to NO SMOKING. They were really strict.

All that aside, the reason we came here is called Crescent Island. The island is the remnant of the top of the volcano that formed the lake. It is a private game reserve. Some rich guy owns it and he somehow got permission to relocate all types of non-predator animals from the rest of Kenya to this island.

You pay to get a boat ride and a guide to the island. Your boat trip passes thru thousands of water fowl, and herds of hippos. Actually a bunch of hippos is called a bloat. We saw three separate bloats, I think they were independent families, so maybe altogether they made one bloat. (Sorry about that, I just like using the word bloat. Try working it into a sentence with a friend in a bar.)

While I’m on this theme, and before I allow you to look at my pretty pictures, I feel I must let you know that a group of giraffes is called a tower. No, really. A group of hyena? A cackle. Here is a strange one, a group of wildebeest is called an implausibility. A group of baboons is called a troop, and a group of Zebras can be called a zeal or a dazzle. All that is only helpful if you are working on a PhD in safari guiding. A herd works fine doesn’t it.

White pelicans in flight. There many grey pelicans where I lived in Panama. These were bigger by about half.

A white pelican up close. Aint they cute? “A wonderful bird is the pelican, his bill will hold more than his belican….” By the way, a group of pelicans is called a pod.

The Sacred Ibis is often depicted in Egyptian art. They are a group of long-legged wading birds in the familyThreskiornithidae.

A cormorantA cormorant drying his wing after fishing. In a group they are called a flight. Boring. 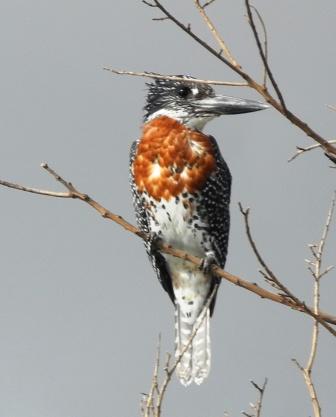 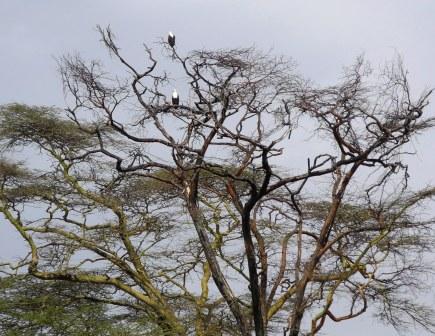 Water Eagles in a tree on Crescent Island.

Our guide whistled to the eagles, then threw out a dead fish into the water. One of them left the tree, circled us and then dove down for his lunch. I was lucky enough to get the photo. I hope you enjoy it.

Ok now for the bloat.

A hippo family. Not something I see every day.

Papa hippo acted like he wanted yo board our little panga.

When we left him in our wake he let us know he was not happy.

Once you are on the island you walk amongst the animals.  It is not a huge island but I will bet there is more dung per acre here than anywhere else outside of a stock yard.

It is a close as you can get to zebra, gazelles, impalas, water bucks and giraffe anywhere. Basically the animals just let you and your camera invade their space. It is as if they know they are there for that particular reason.

Now you know why a group of the are called a tower! 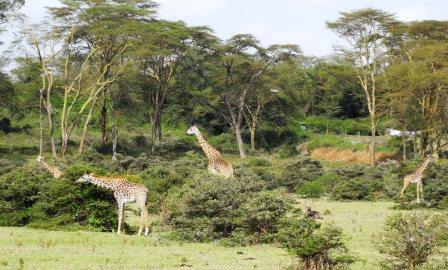 A family of giraffe 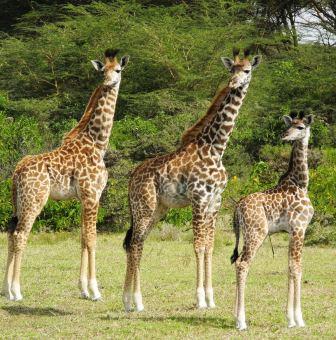 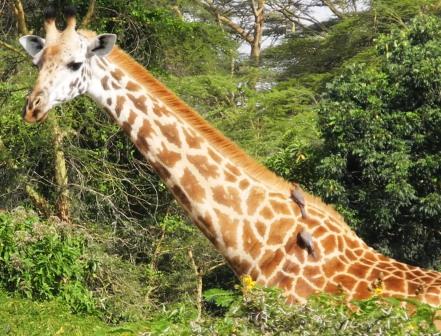 Momma girrafe letting me know I am getting too close to the calves. They look like sweethearts, but Gideon told us that their defensive kick can crush your skull. Mother giraffes are referred to as cows and fathers as bulls. Ah c'mon, someone come up with something original will'ya?

Momma leading the calves away from the damn human with his camera.

A zeal sharing space with a tower. You often see two, three of four distinct species together in the wild. They do not compete for food, and the provide a mutual early warning system against predators.

I actually have many more photos of the animals on Crescent Island. The new age of digital photography allows one to shoot like mad. But if I showed you more animals, I would probably bore you with more nomenclature.

In the morning we leave for Nairobi, and sadly make our way “out of Africa.”  Final thoughts? Well read my next post because I have to find a way to express how much I loved what I saw. Please share this post with your FB friends as well as your real friends. AND PLEASE make a comment.