Planes I Have Flown On In My Travels

The first plane I remember flying on was  a North Central Airlines DC- 3 My father worked for North Central so we flew non-rev, meaning free. We called these planes puddle jumpers.

There are still small operators with DC-3s in revenue service and as cargo  aircraft. The common saying among aviation buffs and pilots is that “the only replacement for a DC-3 is another DC-3”. The aircraft’s legendary ruggedness is enshrined in the lighthearted description of the DC-3 as “a collection of parts flying in loose formation.” Its ability to take off and land on grass or dirt runways makes it popular in developing countries, where runways are not always paved. This was indeed the case when I flew on DC-3’s in Bolivia in the early sixties. The runway was not paved. More exciting was that the ceiling (maximum height the plane could fly) was below the altitude of the Andes mountains we were flying through. So, we weaved our way between the mountains, and could look out the windows at peaks far above us.

For a short while the DC4 flew, and I remember being on one flying to Chicago. It was a big deal because it had four engines!

Very few DC-4s remain in service today.  There are a couple nostalgia airlines still flying them, and I would love to take a trip on one again. 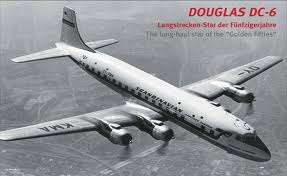 The DC6 came around and became the work horse of many airlines.

I flew on DC-6s all over South America on LLoyd Aereo Boliviano. I flew over the Andes and across the Amazon jungle to Brazil. I swear I remember flying over a native village in the middle of  the Amazon rain forest, looking out the window, and seeing natives angrily waving spears at the giant silver bird. Remember, this was 1964, we were flying at about 5000 feet, and I was 10.

I flew a Pan American DC8 from Lima, Peru to Miami. before we boarded, there was an earthquake in Lima, which shook the airport quite well. Then, they led a man aboard in shackles. Then, over Cuba, the cockpit filled with kerosene smelling  smoke. Quite the flight! 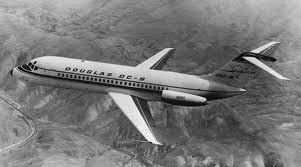 The DC9 was cool because it was the first plane I ever flew with the tail mounted engines!

The DC10 came along and it proved size does matter. Although the last DC10 was delivered in 1989, some still fly.

The DC10 had stiff competition from this Lockheed L1011. The L1011 was not only prettier with the tail engine configuration, it also used some very modern luggage handling techniques  and in cabin service innovations, including a galley underneath the main floor. Trans World Airlines heralded the TriStar (the L1011’s commercial nickname)as one of the safest aircraft in the world. Indeed it had almost a flawless safety record.

At this time in my life, my father worked for Lockheed. I got to go on a walk-thru of the plane before the first one was built. Then, when they went into operation I was sure to take a flight. It was a very quiet aircraft, also nicknamed the “whisperliner”.  It faced stiff competition from the DC10 and the 747, and proved to be Lockheed’s last civilian liner.

Now, onto the Boeing line!

Ahh, the 727. The only thing cool about this plane is the rear passenger exit made famous by D.B. Cooper, one of America’s most mysterious outlaws. I used to fly these PSA 727’s from LAX to SFO to see the Grateful Dead. PSA had a midnight mail run flight for about US$10. The back half of the cabin was full of mail bags and front half full of hippies. We got away with things no one would dream of doing on an airliner today. The stewardesses just ignored us for the entire flight! Those were the days!

The Boeing 737 has been in production and service a very long time. The initial 737-100 flew in 1967 and entered airline service in February 1968. The 737 series is the best-selling jet airliner in the history of aviation. Newer versions of the plane provide a great mid range fleet option for many airlines, including my favorite, QATAR.

The 747, known as a jumbo or a heavy, comes in many configurations and sizes. My favorite flight on one was from Melbourne to LAX. I left at noon on Sunday, and arrived at noon on Sunday. I was in Business class and slept the whole way. It was like being “beamed”. Instantaneous.

Not one of my favorite aircraft. The Boeing 757 is a mid-size, narrow-body twin-engine jet airliner that was built by Boeing Commercial Airplanes from 1981 to 2004. Being a narrow body, single aisle craft with a large passenger capacity makes it a claustrophobic nightmare. It also takes a long time to board and deboard. Not fun

The Boeing 767 is a mid-size, wide-body twin-engine jet airliner built by Boeing. It was the manufacturer’s first wide-body twinjet and its first airliner with a two-crew glass cockpit. Glass cockpit? This means everything is digital, nothing analog. My favorite flight on a 767 was (of course before 9/11) from Toronto to Miami on Air Canada. I was flying first class. The cockpit door was open so I stood there and looked in. The co-pilot said hello. I told him I worked on flight simulator games and was just interested. When he asked which games, I told him and he replied “wow, those are my favorites, step in here” So I spent the next hour in the cockpit. It was a rush. Those guys have a great view! The whole time, they never touched a thing, the plane was on autopilot. I asked if they had to take  control to land it and they said “nah, but we like to”.

The 777ER. This is the plane I find myself on the most these days. ER stands for Extended Range. My favorite seat is 44C. This is a great aircraft, and Emirates is a great airline. The -300 variant of this plane is the longest fuselage in flight. The “triple 7” set a record for the longest non-stop flight of a passenger airliner by flying 11,664 nautical miles eastward from Hong Kong to London. (Lasting 22 hours and 42 minutes. I’ll bet there were some sore butts on that flight.)

I’ll get back to Boeing at the end of this post for obvious reasons.

For now, let us look at the Airbus planes I have flown.

This is the A319. Druk Air, the only airline that can fly you to Bhutan uses the A319. This is a memorable flight, especially the landing. For an exciting look at the most exciting landing on the planet, go here.

Just as Boeing has stuck with the 7 theme in naming its craft, Airbus seems stuck on the 3xx theme.

This is an A320 flown by Air Asia. I have made many flights on this baby. Excellent plane, excellent airline. The carbon emissions of an A320 are less than a 737, and one of the lowest in commercial aviation.

Step up to a the A330. It is a wide body that went into service in the mid 90’s and is very fuel efficient airplane.

The biggest plane I have ever flown on is the A380. An 18 hour flight from central China to LAX. The plane, from a passenger’s point of view (in economy) is not that exciting, but it IS huge.

Now for odds and ends.

For four long years I lived in a backwater called Bocas Del Toro, Panama. The only way in or out of Bocas (other than a chicken bus then a water taxi) was to fly. Two airlines served the airstrip (I will not call it an airport). One was Aeroperlas

Aeroperlas, or as I called it scaryperlas flew these Shorts 360 (or as I called them ‘in your shorts”) aircraft which looked to me like some rail car someone stuck wings on. Someone got this photo after a plane was washed, normally they looked horrible, outside and worse inside.

The other option was Air Panama which used a Saab 340. In the four years I lived there, due to pilot error, two flights crashed. That is what you get when you hire teenagers to fly your planes. 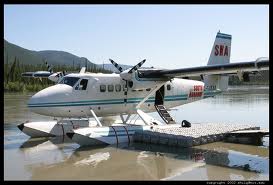 Perhaps the safest plane I have ever flown on are called Twin Otters. I have flown them into a fishing lodge on a river in Alaska, and into a Mining camp in the Andes. They are just great aircraft.

My wife and I trusted our lives to Buddha Air to fly up close and personal with Mt. Everest on a Beech 1900. 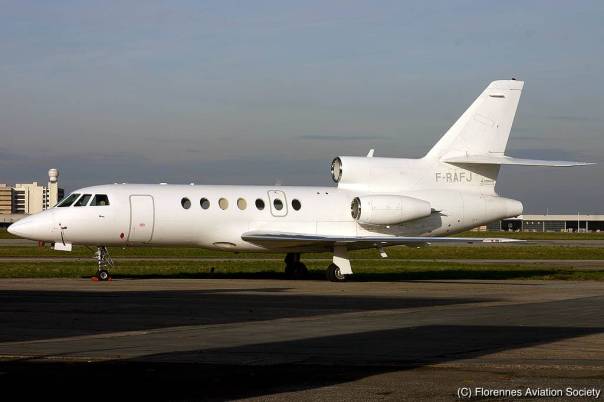 I was treated to a flight between Santiago de Chile and Barriloche Argentina on Stephen Bechtel’s Falcon 50. Now I know how the 1% live. The faucets in the head were made of gold. This is in case the plane gets taken by kidnappers, they can bribe their way out of trouble. It was a comfy flight.

And now, the end, the final, the future…

In about 24 hours I am going to board a Dreamliner, the Boeing 787! This is supposed to be the most advanced aircraft made to date, both in aeronautics and passenger comfort! We will see. As you should know by now, I have a LOT to compare it to!

Thanks for reading. Sorry this was so long but after all I have been flying for fifty + years! Please share with a friend, and make a comment!