We left Amboseli at 7:30 for an 8 hour drive to Nakuru Lake  National Park. The park is located ½ of a degree south of the equator, so I can definitely claim to be in equatorial Africa. The park and lake are  in the Rift Valley. This valley is over 9000 kilometers long and extends from Mozambique to Israel. It is a valley of legendary big white hunter tales. If you want to know a lot more go to http://en.wikipedia.org/wiki/Great_Rift_Valley  I remember it best because  Richard and Mary Leakey have  done significant work in the valley.

Along the way we stopped at a view point and took in quite a bit of it in one vista. 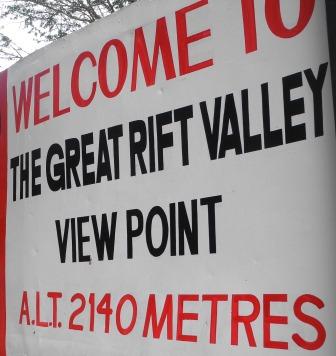 Even overlooking the rift valley, Mary Ann can find a Yankee fan.

We could barely make these out from the overlook, but when we drove past them I was impressed to see them just miles away from where the Leakeys found one of the most ancient humanoids.

You are welcomed to the park by baboons.

The park itself is very lush and green. It sits on a large salt water lake which provides sanctuary for millions of birds, especially Flamingos. This is not the peak time for the Greater Flamingo migration, but there were still tens of thousands of the lesser flamingos grouped along the shoreline turning it pink. There were thousands of white pelicans as well as guinea fowl and marabous. Time for photos? OK

Not one of the more beautiful birds, but of substantial size.

The trees surrounding lake Nakura were full of large birds

The helmeted guinea fowl is a favorite food of the Masai. Gideon told us you will never enjoy chicken after you have one of these. To catch them they soak corn in liquor and lay it out for the birds to eat. Then they get too drunk to fly or even run away.

The lilac breasted roller is truly fabulously colored in flight, but I missed it.

The flamingos in the background are lesser flamingos. They provide a beautiful pink rim to the lake. However, in July, there are thousands of thousands of greater flamingos that turn the whole lake pink.

We saw impalas, water buffalo, white Rhinos, waterbucks, and troops of baboons. I hope you enjoy these pics.

This was as close as I could get to a herd of white rhinos. The white rhino is not one of the big five. The black Rhino is because they are lot rarer and more elusive. 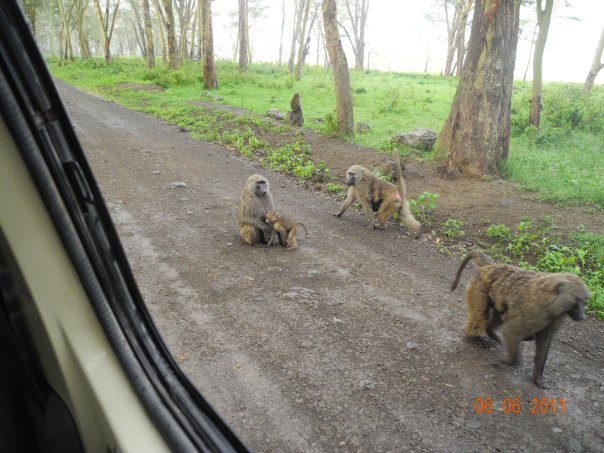 Baboons were everywhere in the park, just meandering around

We saw Impalas in every park we went to but I am partial to this shot.

Water buffalo and attendant birds. The birds eat insects dug up by the hooves of the buffalo and peck insects off their skin. Win win

I forget what Gideon said these were, but aint they cute?

We are staying at a place called Lion Hill Lodge. It is  fabulous. We are only here for one night, so I’ll  steal a towel.

We lost an hour of game viewing because an ATM ate Mary Ann’s card. Our tour agency HTT Holidays and Incentives (www.travelhtt.com) did everything short of ripping open the ATM machine with one of the Masai swords. They even lent us cash for the rest of the trip.  It all worked out because of the dedication of the HTT staff and our guide Gideon.

In the morning we head off to Masai Mara National Park. This is the big destination for great white tourists like us. We have already seen 2 of the big five and we look forward to checking off the other three. When we do, I feel like cracking open a bottle of champagne, except I hate champagne.

Maybe we will just have an extra Tusker. Tusker is the beer of Kenya.

Mary Ann enjoying a Tuskers. The brand was first marketed in 1923, shortly after the founder of Kenya Breweries Ltd, George Hurst, was killed by an elephant during a hunting accident. It was in this year that the elephant logo, that is synonymous with Tusker Lager, was incorporated. The slogan "Bia Yangu, Nchi Yangu", means "My Beer, My Country" in Swahili.

The national drink of Kenya is the Dawa. The Dawa reminds me of the Pisco Sour of Chile. It is an acquired taste sort of thing. I’ll certainly have couple more if I see a black rhino and a cheetah, the two most difficult sightings of the big five.

The Dawa African Cocktail is said to be so potent that it will cure whatever ails you. Since Dawa means "medicine" or "magic potion" in Swahili, I’ll believe it! The recipe is based on a famous Brazilian drink that was introduced to Kenya. It is now one of the most widely consumed cocktails in Kenya!

Dr. Dawa will cure your ills!

Asante san (Thank youu very much in Swahili) for reading. Please pass this along to a friend and please make a comment.

My Introduction to the Masai of Kenya at Amboseli

After a 5 hour drive SSW out of Nairobi we arrived at the Amboseli Sopa Lodge, located on the outskirts of Amboseli National Park.  The lodge is stunningly beautiful and comfortable. Yes, we are “in the bush.” I know, because there is no internet and cell phones do not work.  Actually the lodge has had internet, but it does not work anymore, and the cell phone coverage is limited to one carrier, the name of which is, wonderfully, Safaricom. The lodge provides every other creature comfort one would expect in an expensive lodge anywhere. The people who designed and built this place did not miss a detail. The woodwork is all hand carved with animal scenes. The bed has a big elephant head carving for the headboard. 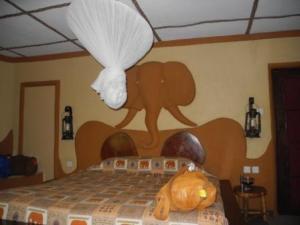 The hotel sits near the base of Mount Kilimanjaro, the tallest peak in Africa. The mountain itself is actually in Tanzania. It is often covered in clouds and everyone hopes it makes an appearance.

Everything is in the style of the Masai tribe, from the curtains to the lamps and the rugs.  The bar, called the Hemingway Bar is huge and is reminiscent of the big white hunter days.  We are here two weeks before high season starts, and the place is almost empty. I think service here would be excellent if they were chock-a-block, it is incredible right now.

This is Masai country. The Masai people still “exist” just like you have seen in the movies. If you saw Out of Africa, and remember Robert Redford’s Masai servant, well that is how many of them still dress. I’m not talking about some show they put on for tourists. Uh Uh. I’m talking about how they dress out herding their goats or just walking cross country.   They are incredibly kind people and seem as interested in us as we are in them. Plug into this experience the fact that the national language is English and they all learn it in school, and the opportunity for cultural exchange is just incredible.

A Masai and I. (Screw the grammar, it rhymes)

Our guide happens to be Masai. His name is Gideon. All the Masai have baptismal names in English. We have him to ourselves for the entire week, just the two of us and large Land Rover with a pop up roof. I met a teenager on the road and we exchanged names. His was Evan. I told him mine and he said “like the bush?”

Before I try to describe our first game drive, I am going to pass on a few things I learned about the Masai today. I inherited the ability to ask nosey type questions from my mother, so sometimes I actually learn interesting things others might miss.

When you see a pair of Masai men walking together (actually one behind the other is the way they walk, not side by side) one of them will always be carrying a long stick. Even if two are on a motorcycle, one will have a long stick. I imagine that if two of them ever flew on an airliner they would sit one in front of the other, and one would have a large stick. I had to ask why. Gideon’s answer was “self protection.” He saw the perplexed look on my face and said “against animals.” Then he went on to say that the second fellow will always be carrying a sword or club strapped to his leg. To prove the point, he pulled out a two foot long formidable club from under his western cargo pants and said “we never leave home without it.” When I met Evan, he was carrying the big stick and I had to ask if he ever had to use it. All he said was “I have it if I need it.”  Gideon was standing with us. He reached under the Masai blanket (They wear them like robes) of the other young man and yanked an eighteen inch sword from a sheath strapped to his leg and said basically “we all carry.”  These people live every day amongst lions, hyenas and what not. Be prepared is not just a slogan for them.

The hats at the royal wedding cannot compare to this. Those are ostrich feathers in case you want to make your own.

Gideon told us that at age 15 the men get circumcised (ouch) and then spend up to a year wandering in the bush. To become a warrior, they have to kill a lion. If they do, they get branded with a hot piece of metal on their cheeks and thighs. The leader of the group must cut the tail of the lion before they kill it. I’m not sure they still kill lions, but that is the old way. Gideon only wandered for two months and then he had to get back to school. He is not branded. He has a University education in tourism. He had to learn a lot of Kenya history and of course flora and fauna. He is adding an incredible amount to our experience. Mary Ann and I are planning an enormous tip.

I was learning bits and pieces about the Masai all day, but one thing totally blew my hair back. Innocently I asked about their burial traditions. I had not seen a cemetery so I asked if they practice cremation. Now remember, the Masai of today are Christians. Gideon explained that what they do is shave the body, and cover it with oil. Then they slay a cow, skin it, wrap the deceased in the cow skin and take it out in the bush for the hyenas to eat. Then they feast on the cow. I would not have known if I had not asked, which just might put a damper on what else I ask. But probably not. Tomorrow we are taking a side trip to an off the tourist track true Masai village, where I Intend to learn as much as I can about these fascinating people. Having a Masai as an escort should break the ice nicely. The next post will cover that along with some truly cool animal shots!

Asante is Swahili (Kenya’s second language) for thank you. So Asante for reading and please pass this along to your friends on Facebook and in the real world also.