Doors, Windows and Alleys in Portugal

For some reason I am fascinated by doors windows and alleys. If I take 500 photos on a trip, a hundred are usually of  beautiful windows, and doors and the occasional alley. This is especially true in Europe.  I just returned from the Travel Bloggers Unite conference in Porto, Portugal. After the conference we were treated to a tour of northern Portugal by the Portuguese Travel Authority. Besides drinking an awful lot of port wine, we saw quite a variety of buildings and churches. This is a photo essay of my trip. Please enjoy it. By the way, I am not uptight about other people using my photos on their site, although I would like credit if you do. So, on with the show.

How could I help but start with this one!

The Third Secret of Fatima Revealed

Just in case there is someone reading this who is not at least somewhat familiar with the legend about Our Lady of Fatima, I will give you a brief irreverent rundown. If you want more, you can always go to Wikipedia, but my version is more fun!

Fatima is a small village about two hours drive out of Lisbon, Portugal.  In 1917 three young Portuguese shepherds (all cousins) were (according to the legend) visited by a Marian apparition, six times over a six month period. The apparition is now referred to as Our Lady of Fatima. Our lady of Fatima is said to have entrusted the shepherd children with three secrets. The first is a description of hell. It is quite graphic and enough to make you give up drinking.

The second described the end of WWI and the coming of WWII. Once you get past the fire and brimstone, the second prediction was amazingly accurate.

Now we come to the third secret. Two of the cousins died at a young age from Influenza. The third, a woman named Lucia, who had become a nun, fell ill to Influenza in 1943. She had never revealed the third secret, saying that the world was not ready to hear it. So, the local bishop visited her bedside and convinced her to write it down, so it would not be lost to the world. Nuns tend to do what Bishops tell them to do, so she wrote it down. She sealed the secret in an envelope and told the church not to open it until 1960, when it would be better understood.

The envelope was stashed in the Fatima area until 1957 when it was delivered to Rome. As everyone knows, Rome can keep a secret. They did just that until 2000 when rumor and speculation around the secret were rampant. People around the world wanted to know…did Our Lady of Fatima reveal the end time? Why won’t the Church tell us anything?  One person was so desperate he hijacked a plane, with his only demand the revelation of the third secret.

In 2000 the Church told the world what was in it. Basically nothing, they said. It sort of predicted the 1981 assassination attempt of Pope John Paul II, they said. They released some heavy fire and brimstone words describing fire and lights and flaming swords, all this supposedly the vision had by the three children and written down by Sister Lucia, they said.

Many people were quite disappointed and many more quite skeptical. There just has to be more to it, or why would they have kept is secret for so long.

Well in my first hour in Fatima I realized what Sister Lucia wrote down, and I am about to reveal it here. One sentence, no fire, no brimstone, no end of the world. What did she write? Ready? Here it is, hold on, sit down, take a deep breath. She simply wrote:

IF YOU BUILD IT, THEY WILL COME 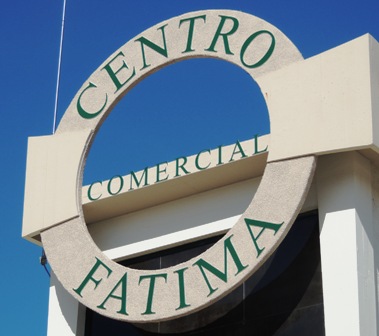 Quite simply the largest souvenir stand I have ever been in. If you take all the souvenir stores in Cooperstown and put them under one roof, it would not be as large as this place. They were doing enough business to keep the economy of Portugal alive for another generation. Mary Ann bought a statue of Our Lady of Fatima, I bought a ball cap made from cork. They sold Fatima wine, but I just could not fathom buying any. Maybe some of the Fatima Holy Water, but naaah.

I must say  once you got past the gift shop, the church did a beautiful job of creating a shrine for the faithful.

Topped off by this gold crown is the Basilica

The basilica is quite impressive. The tower the gold crown sitson is 223 feet high.

The basilica has masses all day long to cater to the continuous line of tourist buses bringing the faithful, the curious and the likes of me. The three shepherds are buried in this basilica. They were beatified in 2000. 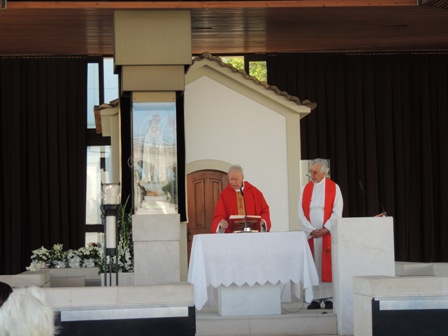 Services are also continuously held a hundred yards in front of the church which is the sight of the original apparitions. 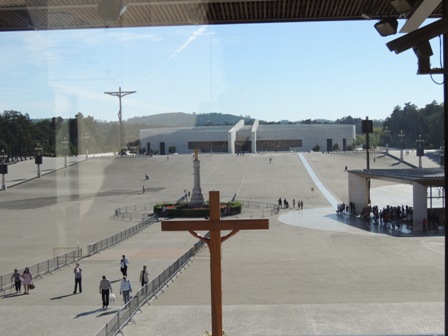 This photo is from the front of the basilica overlooking the esplanade built to accommodate the over  one million pilgrims who attend service here on May 13 and October 13, the dates of the most significant Fatima apparitions.  In the far distance you can see the Church of the Most Holy Trinity which holds over 9000 worshipers. 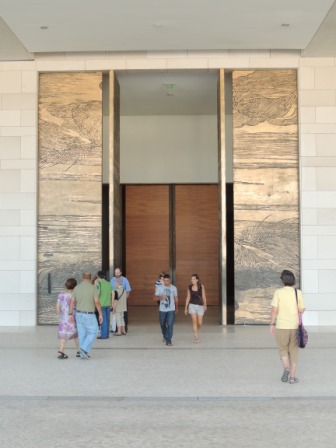 Somewhere dwarfed by these massive doors to this ultra modern and very huge church is my wife.

Just to give you an idea of the size of this church.

And what would a modern church be without a modern depiction of the crucifixion.

Thanks for reading. You can now sleep easy at night knowing that Our Lady of Fatima and the Mayans were not on the same calendar!

Please share this with all your social media friends, all it takes is a click on a button! Stick around, come back soon for more about our recent trip to Portugal.