Our leader from Intrepid is named Pesh. She is a Kikuyu. Pesh has been a tour leader for a really long time, and I am just a minor annoyance compared to some of her guests in the past. Oh well, I try to be the most annoying, but I seldom reach that status!
The issue of the US$100 bill minted in ’96 has been on my mind and my lips for days now. I cannot get anyone to give me a definitive reason why older bills are not accepted. It is almost as easy to counterfeit a new bill as an old one. Anyway, just for principle of the argument, it bugs me.
The truck pulled into a strip mall in Rampala where people could get souvenirs or a cup of coffee.
Pesh told me she would get my bill exchanged here. So I am sitting in a UAE exchange waiting for  her.  I am desperately trying to go with the flow on this trip, but the flow is not in my favor, it seems. As planned as our itinerary is, I keep wondering what will happen next. When Pesh arrived, she took the bill and went up to the window. I was ready to accompany her but she told me to just sit down. UAE Exchanges are all over the Middle East, Asia and Africa. In fact I had gotten this bill at another branch of UAEX.  I watched from a distance as they put the bill through a counterfeit detection device and gave Pesh a new one. She  handed me the new hundred with a look that said hakuna mutata white boy.
We had a hour to kill in this strip mall. I had a wonderful banana milkshake in a place that supposedly had wifi, nope, broken. WIFI, even when working in Africa is never fast, and it usually is not working at all.
Then we trucked another six hours directly east across Uaganda. If you want to map it, we drove from Kampala to Port Fortal. I figured out what Uganda does with the fifty dollar visa fee. They build speed bumps. You cannot travel a mile in Uganda without crossing a set of speed bumps. The truck did not take them well at all. Shake, rattle and roll.
We are camping again, In a beautiful campground where supposedly we will see multitudes of chimpanzees. We overlook lake Navi Keri, which means noisy frogs. Other than the lake all we can see are  tea plantations. There are a lot of tea plantations in Uganda, I wonder what the tea is like. The local Beer is called Nile Special. 5.6% and quite good. 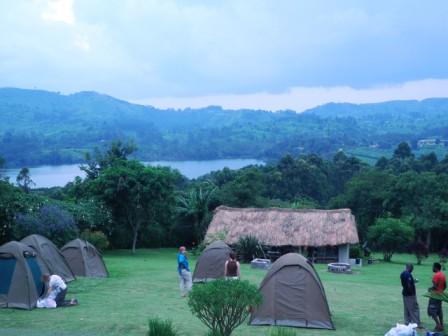 A beautiful location. You can see the tents, and in the background the lake.

This is another opportunity to get to know my fellow Intrepid travelers. The oldest person on the trip is a U professor from NZ. She is quite smart and has traveled all over Africa.
The cooks made another  wonderful dinner. On this trip at least, Intrepid feds you very well. Then I bought the crew drinks. I came back to my tent, fell down. And it caved in on me. Thankfully one of the crew came by and saved me.
In the morning I “explored” a library owned by the Brit who owns this lodge. He was a history professor in Britain and collected quite a few seminal books on the white man’s experiences here in east Africa.

This book was published in like the 1880’s. I perused it a bit and found out a lot of interesting facts about where I was that you do not get from Lonely Planet!

I was surprised that I was allowed to paw through them. The engravings, photos and maps helped me understand where I am and what it was like back then, 120 years ago. When I took time to read about the early explorers travels, I learned to quit bitching about the truck we were in or the roads we were on. (almost)
This two day stop was arranged by Intrepid to see a forest full of Chimpanzees.  I will quote here from the itinerary
“…an amazing opportunity to watch the way chimps feed…play…and care for their young ones.”
It was nothing like that.
The chimps were all in the tops of the trees and they were not about to come down for the tourists. It was hot and humid on the floor of this impenetrable jungle, they were all up top of tall trees, snoozing in the breeze.

Look very hard andyou might see the outline of a chimp up there, somewhere. At least that is what the tour guide told me, so I took this photo.

Just about the time I wrote this visit off, we found this guy.

Finally one came down from his nice breezy treetop abode, just long enough to get to another tree and climb back up.

OK, so it was sorta cool, but not something I would recommend.
Then we were off for Queenn Elizabeth National Park.
Thanks for reading. Stay tuned for the gorillas. Tell a friend, share on Facebook and if you will, please make a comment.
0.000000 0.000000