← Blogging from 30 Thousand Feet Over the Arabian Desert
What Ever do We do when we are not Traveling? →

I cannot believe I am in Beirut.

There is a National Geographic adventure show titled Don’t Tell My Mother. That is how I feel. The name just brings up memories of not so far in the past wars and such. However, at the end of 2010, Beirut is a prosperous and  peaceful city. I do not know where the money comes from. This is not an OPEC country. But there is a lot of money on the streets of Beirut. The little research I did indicates the the diaspora from the 1975 to 1990 war has created an influx of money back into Lebanon at a $1,400 per year per capita rate. But that is not why you read this blog, is it. Back to stories and pictures.

First, the Campus. The AUB was established by some American protestant missionaries in 1866. At the  time, there were many protestant missionaries in Beirut, trying to covert Muslims. The area already had many Christians, but they were all Maronite Catholics. I could go into just what the Maronites were ,but Wikipedia does it best. A movement came out of New England to bring “true” Christianity to the Middle East, at least in their minds. The effort was a total failure. According to all the records sent back to New England, there was ONE conversion. The University decided to go secular and it has succeeded ever since.  The founder of the University found an amazingly beautiful piece of land. It overlooks the Mediterranean Sea. It is wonderfully landscaped. It reminded both of us of UC Santa Barbara. Many of the buildings are 100 years old and very beautiful. Some of the faculty housing looked like expensive sea view homes in California. 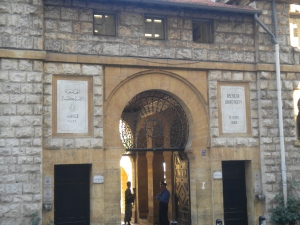 Faculty housing AUB, with sports field in front. Mediterranean style? Well, duh, the med is right behind me!

Mary Ann on the Corniche. The AUB campus is to her left.

The library was not half the AUS library.  But the library at AUS is almost brand new, and probably much better funded.

We walked across campus and found ourselves on the corniche. It was fittingly on Paris Boulevard. The Med was bright blue. The weather was absolutely perfect. Weather like this in early December is very unusual in Lebanon. They are having such a bad drought that the Muslim clerics did a rain dance yesterday. Really, there was a picture on the front page of the Local English language newspaper. In fact the drought and unseasonably warm weather have resulted in, for the first time in Lebanon’s history, a total lack of snow on the mountains. Lebanon comes from the Semitic word Leban, which means white. The early people called it this because after coming out of the desert, it was quite the sight to see mountains capped year round with snow. Not anymore. The locals are blaming global warming. You can agree with them or blame Obama if you must, but it is a fact. For the first time in this country’s long long history, no snow.

However, the people of Beirut (or as it is called locally Beithruth) continue living a cafe society life.

Cafe society, Hookahs everywhere. They do not call them Hookahs, but I cannot spell and you could not pronounce what the do call them so why bother. I had one at my table for our last supper in Beirut. It is a very casual and civilized thing to do.

Christian church and Muslim mosque next door to each other. The catholic church here is the Cathedral of St George. 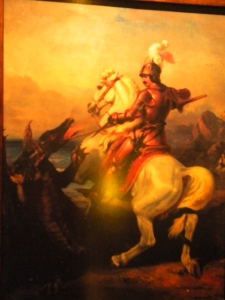 A painting inside the cathedral depicting St. George slaying the dragon! The cathedral of St George is built on the very site where he did so! Well, according to the Lebanese. The Syrians claim the same for their country. It is basically a parable brought back by the crusaders showing that they had gone to the middle east to destroy evil. 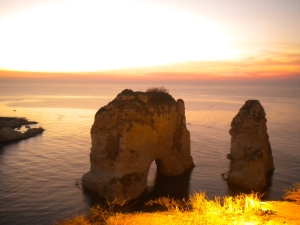 Pigeon Rocks at sunset. You can sit here, have a beer, smoke a Hookah and see a great sunset. Very civilized.

The Cathedral of St. Stephen, Patron saint of the Grateful Dead

Speaking of long long histories, today, our second day in Lebanon we visited one of the longest continually inhabited cities one earth. How long you ask? At least I hope you asked because I mean to tell you. Here is a list with approximated epochs of inhabitation of the city of Byblos. If you do not like history, just look at the pictures,

First, Byblos is maybe 30 miles north of Beirut, and on the Med in a beautiful location. But enough of the real estate blabber, back to the history. Archeologists have found proof of life here going back to 5000 B.C. That is the Neolithic age. It was occupied during the Chalcholithic age (Google it, I had to) age between 3800 and 3000 B.C. It was occupied during the early Bronze Age from 3000 to 2300 B.C. Then started the rule of the Semitic Amorites (Google that too) from 2300 to 2200 B.C. Then the age of conquest began. The Hyksos Dynasty, (is Google your friend yet?) came from Asia and took over Byblos.  Then the Egyptians took over in 1500 B.C. They held on to Byblos for about 300 years until a group I cannot identify, called “the Sea people”, a gang of seafaring baddies who roamed the med,  took over and held it until Assyrian-Babylonian rule from 1000 to 550 B.C. When the Babylonian empire imploded, the Persians moved in and ruled until 333 B.C. Then Alexander The Great and the Greek empire took over. They held on until the Romans moved in and under Pax Romana ruled Byblos until 330 A. D.

Now that we are in the A.D. period of history we see the Byzantines move in and bring Christianity. It was a Byzantine/Christian city until the Arabs invaded in 637 A.D.  This coincides with the birth of the Muslim faith. It took a while for the boys in Europe to get it together and send in the first Crusade in  1098 A.D. The crusaders ruled Byblos, although they called it “Giblet”, until 1289 when the Mamluks invaded. Then the Ottoman Empire laid claims to Byblos and held it until 1918.

After that, all hell broke loose.

Crusader fort. Bult during the first Crusade and upgraded by the next couple. You could just about call this urban renewal in Byblos. It was built mainly with stones from Roman ruins. It now houses a museum.

Crusaders used roman ruins to build their fort. This shows the mark of a Roman builder on a stone he used to build a temple.

These are the ends Roman columns used by crusaders in their fort as lateral supports. 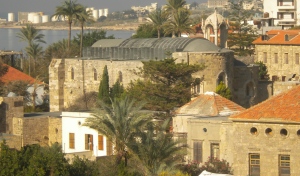 Crusaders also built churches. This is the one in Byblos. 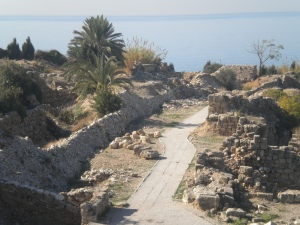 The main Roman road through Byblos. 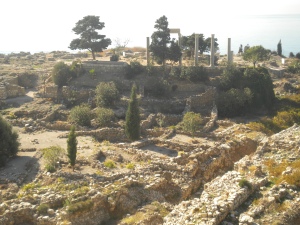 This is what remains of a Roman colonnaded street.

Roman amphitheater dedicated to the god Bachus, in Byblos. This was moved to this location so the archeologists could dig underneath it to get further back in history. It is now 1/3 as big as it was, and the proscenium dedicated to Bacchus is in the national museum.

That is what I mean by Older Than Dirt. Archeologists first started working here in about 1950 when someone was going to build a couple of houses to take advantage of the view. When they started digging, they found all these ruins. The deeper they dug, the older the artifacts. Like I said before, the stuff they found goes back +/- 7000 years. No one has done any archeology here since the civil war started in 1975.  I have more photos, but I can tell you are bored, so I will move on. If you want to learn more about this amazing city, use Google, read a book, or travel.

We also visited a tourist attraction called Jeita Grottos. They were very amazing. They are a main source of Beirut’s water supply. They resemble the Carlsbad Caverns with stalagmites hanging from the top of the caves sometimes for a hundred feet or more. They were discovered by an American missionary who probably got tired of trying to convert Muslims and decided to go spelunking. They prohibit photography inside the caverns, and make you check your camera in lockers. Ironically the lockers all have ads on them for Kodak film. Go figure. I suppose the reason for this to be able  to sell you a CD with photos, so I bought one, and the photos follow. OOOPS, the CD I paid good money for does not allow one to copy photos off of it. SO, Google to the rescue, here are a couple shots. 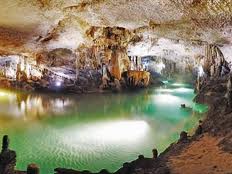 They take you around in a little electric boat. The water is cold, and clear and delicious!

These gottos seem like the perfect spot for a fantasy film with wizards and dragons. Hey, anyone in Hollywood reading this?

We also visited Our Lady of Lebanon, a large statue of the Virgin Mary on top of a mountain overlooking Beirut. I did not know this until now, the Virgin Mary is honored in the Koran, Consequently the Muslim faithful visit this as much as the Christians. Besides that the views of Beirut are fantastic.

Beirut from above. The teleferica takes nine minutes to get you to the top of the mountain.

Our last supper in Beirut was special. I wont tell you what we aye, because this is not Facebook. But it was a totally Lebanese restaurant. There was a table of attractive young Lebanese women next to us. (I must say, I found the Lebanese women very attractive over all). When I ordered Hookah, the Hookah guy (what they call the Hookah waiter who serves you and keeps you lit) asked what flavor I wanted.m I shrugged. How was I to know? One of the girls spoke up and told me I wanted lemon flavored mint. OK. It was excellent. When the regular waiter came by, I just pointed at what the girls were eating, and we had that. They laughed at and with us. The Lebanese impressed me with how friendly they are.

On the Way Home. I made it Ma!

I am sitting in the Beirut Airport coffee shop, having a café Americano with Baileys and watching planes arrive and depart. They go everywhere from here. Air France flies jumbos into Beirut. Maybe the real Paris is too cold in the winter. The airport is modern, clean and easy to get through. I truly expected massive security checks with pat downs, but it was easier then getting out of Chicago to fly to Milwaukee. The only above the norm security was that the immigration man reads EVERY stamp in your passport ( I have 85, took him a while) to be sure you have never been to Israel.

In short, I must say that I of course had preconceptions about Beirut that were rooted in television news reality. That is not to say that things here are amusement park in nature. The military presence including tanks and soldiers with automatic weapons is ubiquitous.  For instance there was a small story in the local English newspaper about an incident in Tyre (the southern border) between Hezbollah and Isreal. Israel was not called Israel in the story. They were quite simply referred to as “the enemy”.  Obviously I will not say that it will always be a good tourist destination. But for us, now, it was fabulous. We did not have enough time to see all we wanted to see, so after checking off a few more places on the coconut, Lebanon deserves a second visit.

Thanks for reading, or at least looking at the pictures. tell a friend, make a comment.

← Blogging from 30 Thousand Feet Over the Arabian Desert
What Ever do We do when we are not Traveling? →