A lot of you have opened this post to read about Mary Ann having to be rescued by a Lady Boy in a Chinese Jungue. OK, but I am going to force you to read some other boring stuff first.

Phuket was what we expected. It is a well developed resort island. Every seasoned Thailand traveler will say “You should have seen it twenty years ago, grass shacks with sand floors”. I reply, “I lived someplace like that for four years, been there, done that and got the insect bites.”  Phuket today has a giant Hilton, a Club Med and everything in between. We stayed in a very comfortable hotel which was across the street from a long beautiful stretch of white sand beach. This beach was special to me because the sand was so soft is actually(really and truly) SQUEAKED when you walk on it.

This is Karon beach. Our hotel is to your left. You can get a massage and a beer right on the beach. You can also just walk around and listen to the sand squeak under you feet.

I DID find one thing to do that involved something more than hedonism, well maybe just another type of hedonism.

I saw a parasail operator. They saw me actually. somehow I have "sucker" written on my forehead

After the guy gets you all strapped up, the last thing he should do is wish you luck then turn and laugh, but that is what he did. 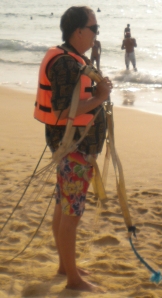 We have lift off of the tourist shuttle dumb shit.

It was actually an incredible flight over the bay. Just about the time I got relaxed, it was over.

The Tourist has landed. One small flight for man.

I guess I liked it!

The next day I talked Mary Ann into going fishing. “Deep sea, big game fishing” they called it. The brochures had pictures of sailfish and huge tuna.

This is what I caught.

I doubt it would taste good even with Thai seasonings.

It was a wonderful day on the water. We had a good time.

The next day we just relaxed and got massages.

There are a multitude of tours available from the island of Phuket. One is to the Phi Phi islands. Normally I tell me readers that what I just wrote is not pronounced  as rudely as  it looks. This time I must tell you that but in the opposite way. it is not pronounced FI Fi, no, it actually is pronounced PEE PEE. It makes for interesting conversations with the tour sellers who ask, “You want to go pee pee?.”  Or “have you gone Pee Pee yet?”   We did not go Pee Pee, even though the Pee Pees are where the movie “The Beach” was filmed. Everything we read about it talks about the intense over commercialization, hundreds of tourist shops selling mostly crap made in China. Plastic busts of Leonardo diCaprio do not interest me.

Our limited research convinced us to go to the James Bond Islands. These are in a region of the Andaman Sea called Ao Phang-Nga Marine National Park. It consists of dozens, OK,  hundreds of Karsts. Karsts are massive limestone blocks pushed up out of the sea by mainland fault activity. You have probably seen pictures of them but in case not, here ya go. This IS a full service blog!

Our tour was on an “Authentic Jungue” How authentic I cannot tell you but it was comfortably outfitted, and attractive.

We cruised close to a couple of karsts so we could see the erosion of the lomestone caused by the salt water and waves.

In thid case the erosion created a tunnel to pass through.

As you can tell from the photos, yes there we an awful lot of fellow tourists out and about this day. No worries. I’m glad they are making money.  This group of tourists were in plastic Kayaks, being rowed by local boys who fish at night from the following village. 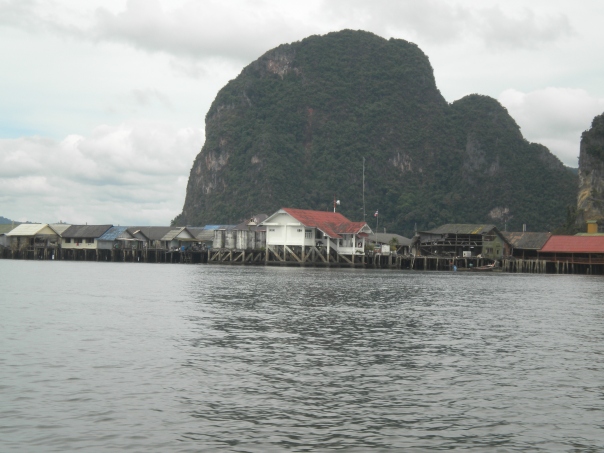 This is a floating village. It is named Paynee Village. It is also called "Sea Gypsy' village because all the residents are Muslims descended from sea faring Muslims from Java.

Of course Mary Ann and I live in a Muslim country, so I  tried my limited (very limited) Arabic with them. Mary Ann laughed and said “Just because the woman is covered, does not mean she speaks Arabic, idiot.” The entire village is dedicated to the separation of a tourist from his money, but again, that is cool. they had a great school, and kids all looked happy.

You shuld take the time to open this photo as large as you can get it and read the "Rules" of the island. You will be humored by some of the English spellings, and especially some of the fines if you violate the rules.

OK OK. Onto Mary Ann’s adventure. But first a word from MI6

Our next stop was at James Bond Island, so called because 34 years ago they filmed part of the movie “The Man With The Golden Gun” here. Unfortunately is was not a Sean Connery movie, so IMHO, not really a James Bond movie. This one starred Roger “The Usurper’ Moore, 006 1/2.

It too is a tourist trap.  If you wait for the Korean and Japanese tourists to get out of you way, you can get good shots of the iconic karst featured in the film’s posters.

Security office on the island, straight out of BedRock

Our tour leader and defacto captain of the Junque was a  Lady Boy Lady Boys are Thailand’s third gender. They do not have to hide in a “ghetto” like the Castro district. They are an accepted part of Thailand life. How can you spot one. Well, first, they have implants that make them a solid 36C, while most Thai girls are lucky to fill out a training bra. If you are still confused, look for man hands and of course an Adam’s apple.

After Bond Island we stopped to swim, out in the middle of the Andaman Sea. Mary Ann had been looking forward to a swim all day. she stripped of her shorts and T shirt and dove right in. She was the first overboard, and the last. By the time she came to the surface she was 30 or so feet behind the junque. It turns out there was quite a current. I watched as she licked lively to try to get back to the boat, but she was being  pulled further and further away. I could sense her look of apprehension, and frustration. So could everyone else. She was now just a spot in the water. I got the attention of Captain Lady Boy. She immediately took command. Her/his voice dropped an octave or two as she started giving orders to the crew.   They threw her a life ring on a stern line which was about 60 feet too short. Then they tossed her an unattached life ring. It too fell short of the mark, but smart Mary Ann let it drift toward her until she could reach it and hold on. Now she waspaddling again, but to no avail. It got to the point where all we could see was the orange life ring.

She is out there somewhere!

I started to say something to Captain Lady Boy but she was a step ahead of me. She got one of her crew to get in the dinghy. He tried to start it for a few minutes while Mary Ann drifted further away. The engine would not catch, so he started paddling towards her. He finally got to her.

If you look hard you can see the dinghy. Mary Ann is holding on.

Everyone on board was shouting encouragement in French, German and Australian, none of which I understand. The Aussie looked at me and said “Is that all you are going to do mate, take pictures?” The only thing I could say was “It is not everyday you get rescued.”

Mary Ann was too tired to get into the dinghy. The rescuer figured he would motor back with her holding on. It took him five minutes to get the little 2 1/2 HP Tohatsu to start. Alas, the current was too strong for the dinghy to get back. The rescuer yelled some Thai at  Captain Lady Boy. The driver of Junque started the engine and made a nice round-about and pulled up next to the dinghy. There was Mary Ann gallantly holding on.

The things some people do for a tip.

And now for the happy ending.

Shaken Not Stirred. My Bond girl!

Needless to say, we had Martinis for dinner that night, and watched this sunset.